Featured Image: New York City, which was most affected by the blackout.

3 October 2018, New York, NY – The top news stories have been exhausting, so let’s talk about something unrelated but still equally terrifying – the Blackout of 2003. This blackout represents one of the most widespread power outages in American history, affecting 55 million people in Ontario and the Northeastern United States. Since 2003 was not that long after the September 11 attacks, many people widely expected the outage as part of another elaborate terrorist attack. But no, not even close. This outage was actually cause by a felled tree in suburban Cleveland, Ohio.

The Northeast Blackout of 2003 began on 14 August 2003 at 4:10 PM EDT and affected over 50 million people. The outage was relatively brief and it took just over 24 hours for power to be restored. But still, the consequences were disastrous., causing 11 deaths and $6 billion in economic losses. People were trapped in subways and skyscrapers for hours, and chaos in the streets ensued. There was a ton of finger pointing. When the U.S. initially blamed a plant in Ontario for the crisis, then-mayor of Toronto Mel Lastman fired back, saying, “Have you ever seen the United States take blame for anything?”

The outage was seen as a wake up call for the nation, calling to attention just how vulnerable our nation’s power grid actually is. 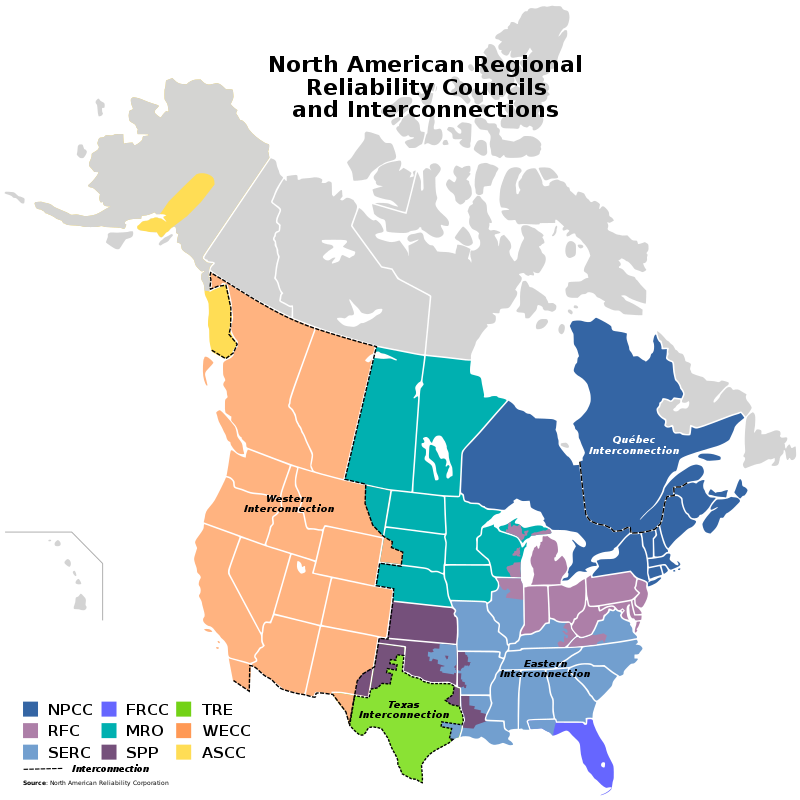 Map of the various electrical interconnections in North America. Both the United States and Canada share their electrical infrastructure.

The development of our country’s power grid was a lot more ad hoc than many of us like to think. Electricity first developed in localised environments, where a plant was built and then a few power lines connected a neighbourhood to a power plant. Over time, the lines were connected into an enormous continental web with no single centralised authority overseeing the system. This makes even the smallest breaches and errors grounds for concern, as any one of them could cause an enormous regional outage.

The numerous power companies in charge of America’s electric grid

And to drive the nail into the coffin even more, the Federal Energy Regulatory Commission (FERC) did not have any enforcement powers until 2005. Which means that at the time of the outage in 2003, standards for grid security were voluntary and not enforceable. Which is why this entire outage was probably caused by the wrongdoings of a single power company in Ohio.

The investigation into the blackout found that it began with the failure of a power line in suburban Ohio. The line overheated, sagged, and struck a tree, which probably affected other power lines. This failure went unnoticed because the alarm system failed at the local power company, FirstEnergy in Akron, Ohio. And the reason the alarm system didn’t work was because the service operator for the Midwest Interconnection also screwed up. Turns out, an employee had taken a lunch break and forgot to turn on the alarm system when he came back.

More problems went unnoticed, and other power plants in the region failed. The failures continued until they finally reached New York City, causing the power crisis.

FirstEnergy was found to be the root cause of the blackout by both the American and Canadian government. The company was neglectful in their basic operations, even failing to trim the trees underneath their power lines, and remember, it was one of the power lines hitting the trees that started this whole catastrophe anyway. They also failed to upgrade their computers, which may also have contributed to the failure of the alarm system.

FirstEnergy was never fined for their role in the blackout.

There’s also the threat of Carrington events. Even though these events are exceptionally rare (the last one happened in 1858), it’s still a possibility. It basically involves the sun shooting out a massive solar flare whose energy has the power to fry electrical grids and charge atmospheric particles. The 1858 event caused telegraph lines to fry and Auroras were seen as far south as the Caribbean. If one happened today, it could cause a worldwide blackout and wreak havoc in every aspect of life. Visualisation of a Carrington Event

We are seriously unprepared for major outages and our power grid is incredibly vulnerable to even the smallest mistakes. Not only is it the responsibility of our government to assert control over this incredibly sensitive system, it is also the individual’s responsibility to ensure they are prepared wherever and whenever a failure may occur.